Loaded Dice ~ Mam'selle
Here's a lost power pop gem from 1979. Loaded Dice where a hard working rock power pop band from band Perth that I would go see from time to time. They were touted as being the next big thing from the West and got signed to a major label, but like the "Boys" listed below, big things never happened. They had good songs and were very good at making the crowd rock in there home town but when they moved to Sydney it was hard to get the local crowds interested and it wasn't long until they disbanded and returned home. They released a couple of singles and great album called "No Sweat" which had a lot of energy just like their live shows but poor sales pushed this album into the sale bins. I'm not sure if Mam'Selle is the first single or the second becasue I have never seen a copy of the other one. I remember seeing them on T.V. once playing the song "Telephone" which could mean that this one was the second.


Mam'Selle is rocking power pop track with lot's of harmonies and hooks and a chorus sung in French no less. They should have toured France beacause this would have been a hit over there. Great stuff.
PLEASE NOTE: 2009 saw a CD reissue of their "No Sweat" album. please visit the following link to get a copy: www.zerohourrecords.com.au
City: Perth
Year: 1979
Label: WEA
Format: 7″
Song: Mam'selle
Posted by Australian Power Pop at 23:21 1 comment:

Chalice ~ In My World

Chalice ~ In My World
Chalice were an English band that migrated to Perth, Western Australia in the early 70s and basically played covers of the day for a few years. After gathering a good fan base they moved to Sydney and recorded this one only album Produced by John English. Overflow is half originals and half cover versions including Seals and Crofts, Beach Boys and Mac Davis to name a few. The first single was the Beach Boys "Sail On Sailor" but is didn't do very well with local radio picking up on the album track that I have featured here, an orignal called "In My World". This track features a great Who sounding riff and the vocals are very reminicent of the Rubinoos, in fact if you didnt know who this was you would believe it was the Rubinoos. The album is patchy for the power pop collector and the song listed here is probably the best track on it. Still worth tracking down if you can find a copy. A classic lost power pop gem from 1975.  NOTE: There will be a reissue of this album in 2012 which will include a good amount of rare unheard material plus their singles.
City: Perth
Year: 1975
Label: Polydor
Format: LP
Song: In My World (1975 LP Version)
Posted by Australian Power Pop at 22:22 2 comments: 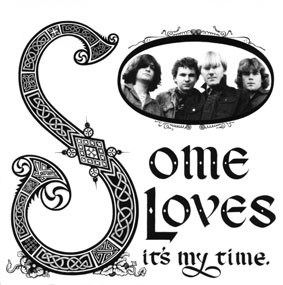 Someloves ~ It's My Time
Let me start off things with a great single which was the first for this part time combo. The band consisted of Dom Mariani (Vocals/Guitar), Gary Chambers (Drums) both from one of Australia's best garage bands The Stems. Daryl Mather (Guitar/Vocals) from a great garage band called The Lime Spiders and Christian Houllemare (Bass) from a band called the Happy Hate Me Nots. These guys share a love for all things power pop and decided to cut a single together when the Stems where touring the east coast of Australia (The Stems are from the west coast) and found some spare time. The single took quite some time to record as parts where recorded in at least 3 different studios in Sydney during 1985.
This is an excellent jangly guitar pop song worth tracking down if you can (only about 1000 copies pressed) but you can also find it on an upcoming Someloves CD compilation which includes both sides of this single and their debut album plus bonus tracks. You can hear it here first ~ enjoy
City: Perth/Sydney